Nice Write Up by Jim Darnell 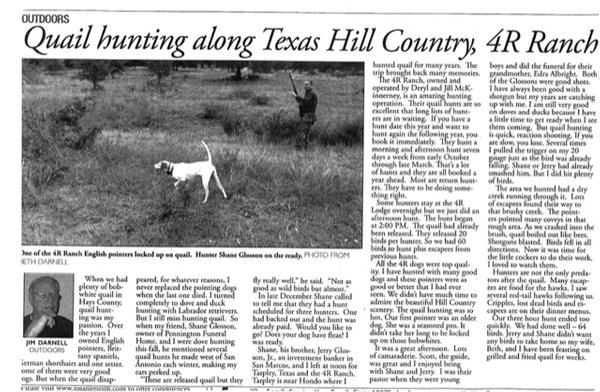 Quail hunting at 4R Ranch was the subject of a great article by our local paper in Texas. Thanks to Jim Darnell of the San Marcos Record.

When we had plenty of bobwhite quail in Hays County quail hunting was my passion. Over the years I own English pointers Brittany spaniels, German shorthairs and one setter. Some of them were very good dogs. But when the quail disappeared for whatever reason I never replace the pointing dogs when the last one died. I turn completely to dove and duck hunting with Labrador retrievers.  I still missed hunting quail. So when my friend Shane Glosson owner of Pennington funeral home and I were dove hunting this fall he mentioned several quail hunt he made west of San Antonio each winter making my ears perk up.

Jean, his brother, Jerry Glosson  Jr, and investment banker in San Marcos and I left at noon for Tarpley, Texas and the 4R Ranch. Tarpley is near Hondo where I hunted quail for many years. The trip brought back many memories. The 4R Ranch is owned and operated by Deryl & Jill McKinnerney is an amazing hunting operation. Quail hunts are so excellent that long lines of hunters are in waiting. If you have a hot date this year and want to hunt again the following year you book it immediately. They hunt a morning and afternoon hunt seven days a week from early October through late March. That’s a lot of Hunt’s and they are all booked a year ahead. Most are returning hunters. They have to be doing something right.

Some hunters stay at the 4R Lodge overnight but we just did an afternoon hunt. The hunt began at 2 PM. The quail had already been released. They released 20 birds per hunter. So we had 60 birds to hunt plus escapees from previous hunts.

All the 4R dogs were top quality. I have hunted with many good dogs and these pointers were as good or better than I had ever seen. We didn't have much time to admire the beautiful Hill Country scenery. The quail hunting was so hot. Our first pointer was an older dog. She was a seasoned pro. It didn’t take her long to be locked up on those bobwhites.

It was a great afternoon. Lots of comradery. Scott, the guide, was great and I enjoyed being with Shane and Jerry. I was there pastor when they were young boys and did the funeral for their grandmother Eldra Albright. Both of the boys were good shots. I have always been good with a shotgun but my years are catching up with me. I am still very good on dogs and ducks because I have a little time to get ready when I see them coming. But quail hunting is quick, reaction shooting. If you are slow, you’ll lose. Several times I pulled the trigger on my 20 gauge just as the bird was already falling. Shane or Jerry had already smashed him, but I did hit plenty of birds

The area we hunted had a dry creek running through it. Lots of escape is found their way to that Brushy Creek. The pointers pointed many coveys in the rough area.  As we crashed into the brush, quail boiled over like bees. Shotguns blasted. Birds fell in all directions. Now it was time for the little cockers to do their work and I loved to watch them.  Hunters are not the only predator for the quail. Many escape is our food for the hocks. I saw several Red-tail hawk the following us. Cripples, lost dead birds and escapees are on their dinner menus. Our three hour hunt ended too quickly. We had done well. 64 birds. Shane and Jerry didn’t want any birds to take home so my wife, Beth and I have been feasting on grilled and fried quail for weeks.

0 Comments on Nice Write Up by Jim Darnell