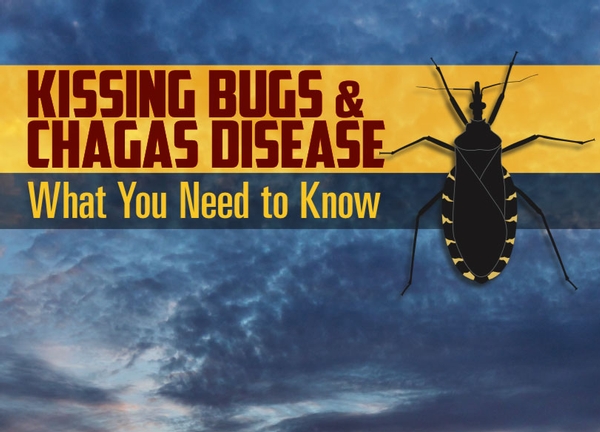 Burley was a handsome Labrador Retriever. His coat was a slick yellow, covering an athletic frame of 65 pounds. Even among a group of good-looking dogs, Burley stuck out. His looks were impressive, but his cocktail personality shined as bright as his coat and he was also a fine bird dog.  Then one day, like everyday before that day, Burley made his rounds in the kennel yard, but he didn’t return to his kennel. Instead, he was lying under a pecan tree gasping for air. In two days time, he passed. Burley has the unfortunate label of being our first dog lost to Chagas Disease.

Yes we took him to our Veterinarian. Then we took him to an Emergency Clinic in San Antonio. All they could tell us was that his heart was enlarged and most likely would succumb to his ailment. Never once did anyone mention Chagas Disease. That was in 2007.  Since then, we have added 10 more dogs to the list of dogs that died in the same manner as Burley. They run around the kennel yard and either collapse dead of heart failure, or we find them in their barrels the next morning, same outcome.

For over 10 years we have been spraying insecticides daily from March 1st until October 31st, and diligently trying to find a means to control the number of Kissing Bugs in and around our kennels, with no luck. In all reality, their numbers seemed to grow every year despite our efforts. Then last spring and summer we lost 3 more dogs in short succession; Drew, Jenny and Carl. It was at that time I began asking myself one simple question; how do you lose 3 dogs you were relying on for the upcoming Texas quail hunting season and keep the quality of your product at a high level? The answer to that is simple, you can’t. Losing those dogs along with the anxiety of which dog was next, set in motion a chain of actions that will forever change the 4R kennels.

I began calling vets, dog breeders, the Veterinary School at Texas A&M, and anyone else I thought could help us with our plight. It was in that search that I got the name of Dr. Roy Madigan in Spring Branch, Texas. It was said he had a protocol that was 100% effective in curing dogs with Chagas Disease. At that time I would have sacrificed a goat in my living room if I thought it would help my dogs, so I called him.

Dr. Roy spent almost 2 hours of his Saturday explaining every aspect of the treatment, the drugs used, as well as the reasons we could not keep the kissing beetles out of our kennels by simply using insecticides. The confidence in Dr. Roy’s voice and his enthusiasm to help my dogs gave me a feeling I had not had in a several years as it pertained to Chagas Disease, hope.

The process started by testing all of our dogs. This test is called a PCR test (polymerase chain reaction). A full 56% of our kennel tested positive for the parasite T.cruzi (the active parasite carried by kissing bugs).

The treatment phase is multi-pronged as two different drugs are used in the protocol; Itraconazole and Amiodarone.  Itraconazole is used to shut down cholesterol production in the parasite. This drug also disrupts the parasites ability to multiply allowing the dogs’ own immune system to take over. The second drug is Amiodarone. This drug keeps the dog from going into cardiac arrest and disrupts the parasites calcium metabolism. Amiodarone also inhibits the parasite from reproducing. Both of these drugs come in pill form and are given daily for one year. We are currently in our final month of treatment.

We have had to test our dogs twice during the treatment phase.  First a blood test to monitor the amount Itraconazole being absorbed by the liver was administered at day 30.  We adjusted several of our dogs dosage based on this test. Too much absorption of Itraconazole can cause liver damage or failure. Not enough absorption and the drugs are useless.  The second test was another PSA at 90 days. 100% of our dogs tested negative for T.cruzi! The drugs are working.

As great as the news has been, there was just one very large elephant left in the room. How do we keep the Kissing Beetles out of our kennel? Because once you treat and cure your dog(s) they can still be re-infected. It seemed counter intuitive to spend $1900.00 per dog on a treatment that could possibly need to be repeated. Fortunately this was the simplest of the steps down this rocky trail. It seems Kissing Bugs and Mosquitos have something in common other than being blood-suckers. Neither of them like Deet. The brand does not matter. We have used OFF and Cutter, they both work effectively. We spray the back of the dog barrels liberally with 25% Deet everyday after feeding. Let me repeat, we spray the back of the barrels, not the dogs. Where we would commonly find a dozen or more Kissing Beetles in our barn each morning, now we find none. If we do find them, they are dead or nearly dead on the perimeter of the kennel and none have been bloated with blood. Deet was a stroke of luck at a time when we desperately needed some.

This journey has been educational, heartbreaking and liberating.  I am not naïve. As long as there are Kissing Bugs, we will continue to have dogs test positive. However, through testing, treatment and prevention, our hope is to minimize the number of dogs testing positive, then treat those dogs. Since I started writing this article we had 9 young dogs tested.  Only 1 dog came back positive. Great news considering the high percentage of positives last year; progress!

When someone laments over our struggles these past years with Chagas Disease, I quickly remind them of a time not long ago when our fathers and grandfathers were fighting screwworms in livestock. I feel blessed that the stars lined up and my path crossed with Dr. Roys. I feel lucky that on a day when we were so frustrated with finding Kissing Bugs in our barn that we went to Hondo and bought every can of OFF in Wal-Mart, and it worked. With the tools we have now to mitigate the effects of the Kissing Bug, we have hope. It is times like these that hope is the most powerful tool we can arm ourselves with.

For those of you who want to read more about The Kissing Bug and Chagas Disease, I have attached the Kissing Bug field guide. If anyone has questions on our procedures for treatment, ordering the drugs from Canada and prevention's, we are a phone call away.